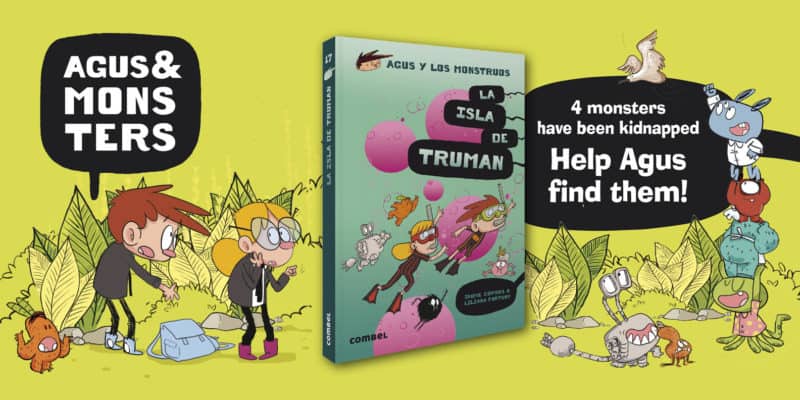 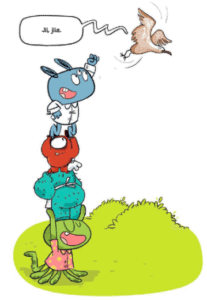 A new instalment of Agus & Monsters series has finally reached the front tables of the bookshops!

On The Isle of Truman, Agus and his friends fight against Dr. Brot and his apprentice Nap once again!

A bunch of men in black led by Dr. Brot and his new ally have kidnapped four of our dearest monsters, taking them to a secret island where everybody has been hypnotised. Nobody can leave. The owner of the island, General Blackboard, is going to help Dr. Brot become the owner of everything.

Cheff Roll, Octosol, Paintish and Dr. Vet, are in danger and Agus and his friends need your help more than ever. Are you ready to rescue the monsters?

Take a look at this list of tips to identify them and recognize their powers when you spot them. Pay attention:

Cheff Roll, the monster of cuisine

He’s a great cook able to make the most delicious meals with anything he has at hand. He is in charge of getting food for his friends and cooking it, and he does so with all his affection. What will Agus and monsters do now?

Paintish, the monster of paintbrushes

She is an artist in every medium: she paints, draws, sculpts, writes… And always with full passion. The other monsters are always eager to see her works. So they miss her so much!

Octosol, the monster of music

He’s an exceptional musician and the life of the parties! Not only does he play every known instrument and those yet to be invented, he is also able to convert any object into an instrument.

Dr. Veter, the monster of animals

She has an incredible ability to become friends with any kind of animal. Also, she knows how to cure them and take care of them. Dr. Veter’s problem is that she also treats people like animals. Who will take care of her now?

Better go to your favorite bookshop and start the search & rescue operation! 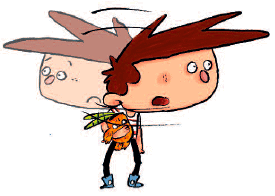