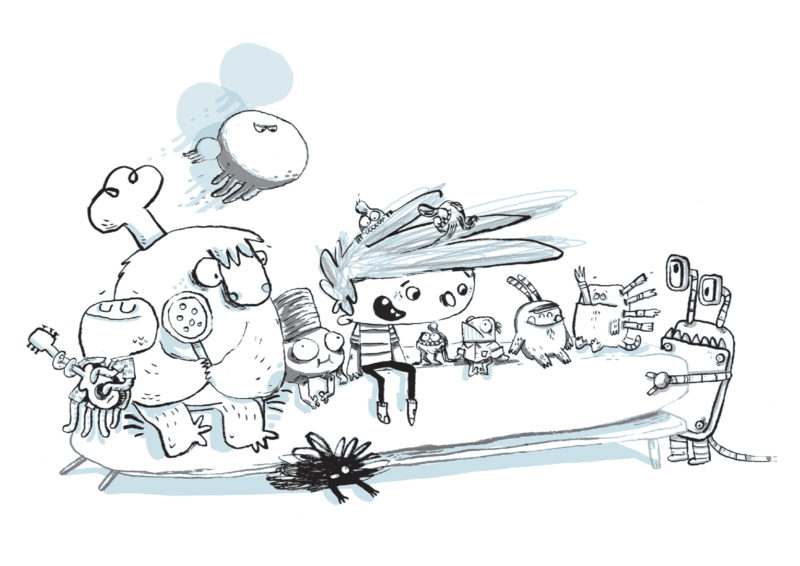 Few readers know that the Agus & Monsters series has its origin in an unpublished novel entitled Agus Pianola and the Monster of Books. Here is the story of the prequel.

10 years ago Jaume Copons and Liliana Fortuny created Agus Pianola and the Monster of Books. It was an illustrated novel that told the story of a boy who meets Mr. Flat, a monster who loves reading and opens to Agus the doors to the world of literature and imagination . 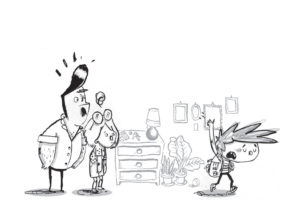 After a long period of hard work the book was ready for print. At that very moment, the authors went crazy: they call their publisher, Noemí Mercadé, and asked her not to publish the novel. Not to publish the book? Copons & Fortuny had gone nuts!

Fortunately, the reason for this request is the graphic novel series as we know it today. Jaume and Liliana saw clearly that the world they had created should be presented in a graphic novel format. They needed a little more time to work on the new proposal and, against all odds, Noemí said yes and that’s how Agus & Monsters was born.

From the novel to the graphic novel

“We set to work. We created new monsters and characters, we delve deeper into that univers we had created. We looked for a model in which we felt comfortable… And the tests followed one after another, both in terms of content and format, and we contrasted everything with Noemí Mercadé and the entire editorial team, until we found the exact format we wanted to develop, that of the graphic novel genre”.

Below you can see some of the black and white illustrations of that first book. You can spot Mr Flat, and some of the most representative characters and elements of the series. They seem rough sketches of the future series. Charming sketches that take us back to that very magical moment: when characters are born and the stories come to light. 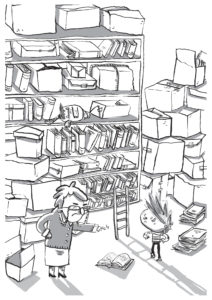 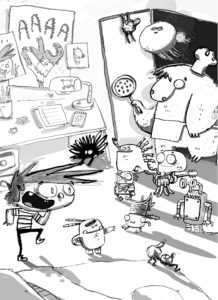 The rebirth of Agus Pianola

The first title in the series, Here comes Mr. Flat! finally saw the light of day in 2014. In this first volume we meet Mr. Flat, the little monster who discovers the world of literature to Agus. Since then we’ve read 22 installments and lived many monstrous adventures together.

It’s very likely that you might have seen Mr. Flat at some point… It’s not a dream. Mr. Flat really exists! This friendly orange cuddly toy with green ears has flooded bookshops and accompanies readers of the series from all around the world!

Haven’t you met Mr. Flat yet? You will find him near a book. Where there is a good story, there Mr. Flat will be!