Behind the main storyline of the series we find an eternal theme: the battle of Good and Evil. 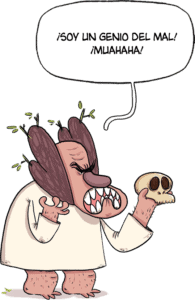 Nobody knows why Dr. Brot is so incredibly evil nor why he hates the monsters so much. It was he who expulsed the monsters from their book. But  Dr. Brot, together with his apprentice Nap, always intends to carry out as many evil actions as possible.

In the fight against the evil genius of Dr. Brot, Agus and his friends will learn to make decisions and take monstrous actions. They will also realize the importance of recognizing others, respecting everyone, valuing effort over results and giving up any personal gain.

The fact that the monsters are imaginary beings allows readears to assign them a series of positive values ​​that sometimes are taken to the extreme. I.e. They do not value the results of actions, but the idea of carry them out. No one ever gets angry because things don’t go the way they should. At least they give a try! All this makes up a way of being in the world in which kindness, humor, empathy and reflection stand out. In that sense, Agus & Monsters books allow us to delve into universal values.

As publishers, we hope some of these monstrous values will open children’s hearts, broadening their minds and expanding their awareness of life and of others. Check it out for yourself!